I always seem to be catching up with blog posts at the moment, I say that I don't go anywhere or do much, but lately there have been a few outings and things going so I thought I would try and catch up with some of them today.
Saturday was our Autumn meet up at the Nimble Thimble.  I do enjoy these get togetherness, It's a chance to catch up with lovely people and stitch all day with none of the distractions you get at home.  When we met up in April I didn't buy anything, I just didn't feel the need, however, this time I did succumb to temptation.
Putini Putini and Cottage Garden Samplings have some lovely charts and I love stitching Christmas and Autumn designs 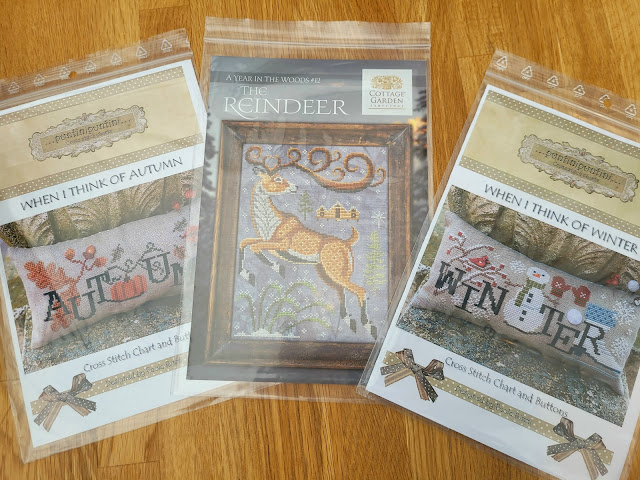 I'd never heard of The Bee Company but just had to have these two cuties.  They both come with the little houses shapes, buttons and fabrics for finishing too. 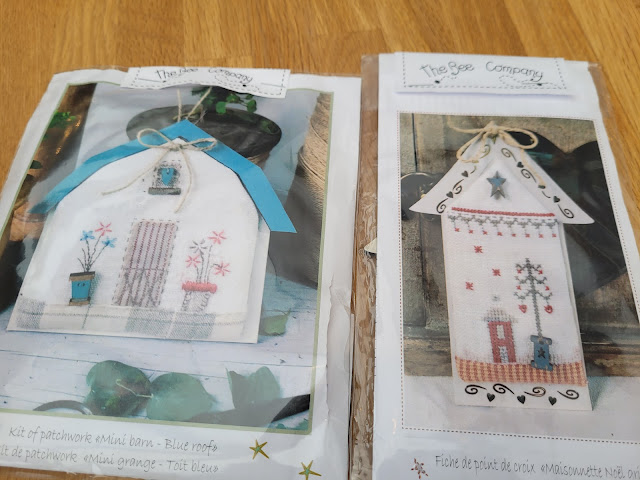 A couple of weekends ago I went to the Creative Crafts show at the NEC in Birmingham.
I had intended going by train as it's way cheaper than the £16.50 parking charge, but there was a train strike that weekend so I ended up driving anyway.  I did save some money on the parking charge by pre-paying, still, £12.50 is still a fair amount for parking when you have to add the price of the show ticket on top.   Luckily I got a discounted show ticket which only cost £9.50.
My intention was to look for fabric for my new make at sewing class and also some sewing supplies.  I didn't get fabric as I thought they were on the expensive side and as I'm still learning I want to keep the cost down.  I did buy a few things though.
Pattern for place mats and table center, the fat quarters were purchased to make the table mat, I won't be making place mats. 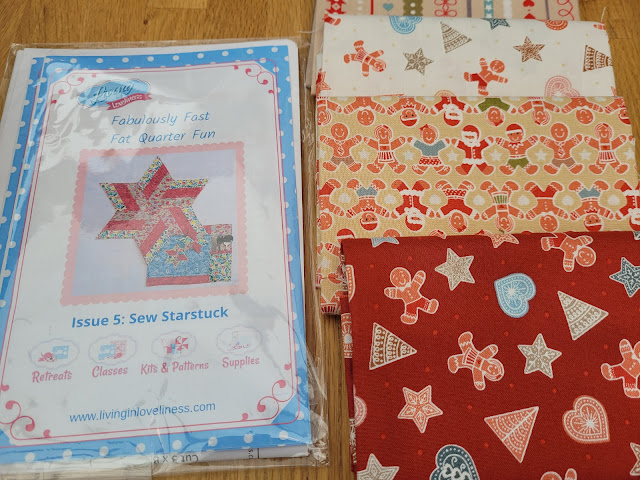 A couple more patterns, both reduced, and a fat quarter of plastic coated fabric. 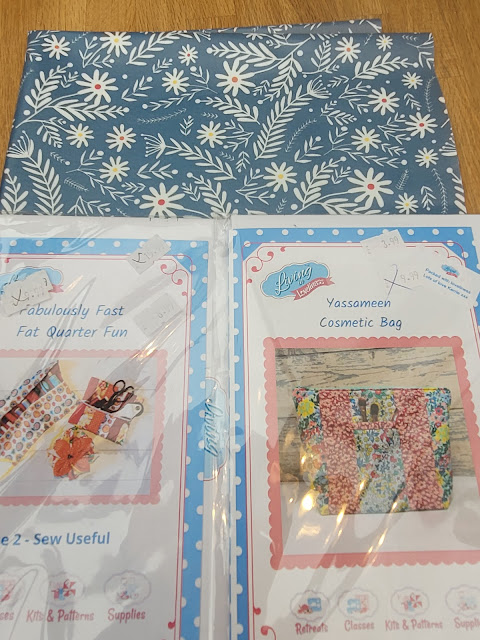 I also bought some tartan fabric and a fat quarter of fur fabric with something Christmasy in mind, and while it was still fresh in my mind I got on and made these last week.
I couldn't find a stocking pattern online so drew one myself, that was the hardest part of this project, I think I could have made the foot section a bit more boot shaped, but that's me being picky,  I am happy with them. 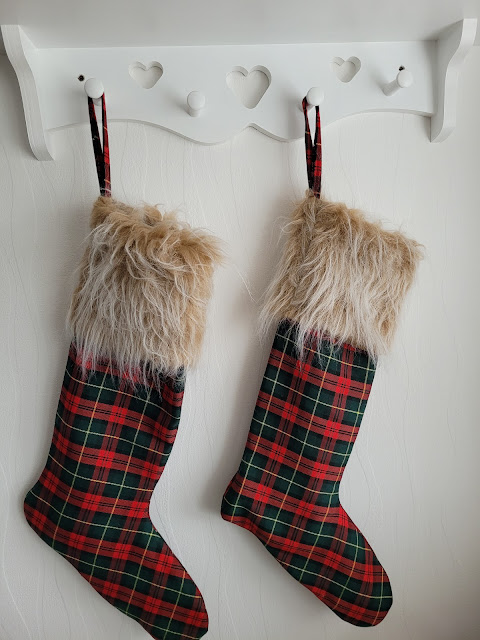 There was a bit of fur left over so I blinged up a plain red sleigh I'd bought from Home Bargains.
I just love how it looks now 🎅 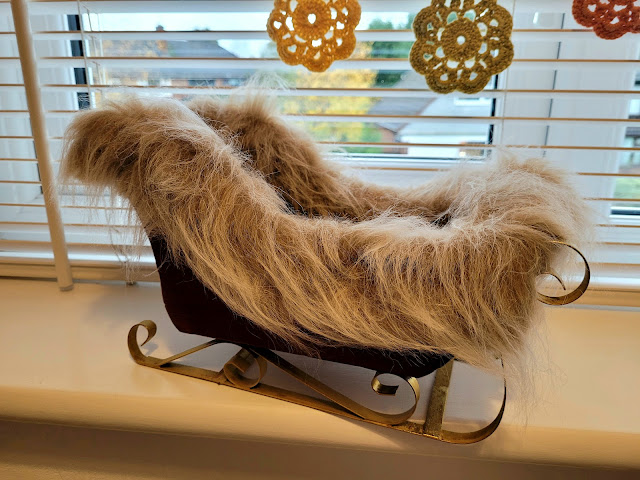 Sunday was the Remembrance Day parade, many years ago when I was a Brownie this was a huge event, roads were closed and the parade went through the streets ending at the local church where there would be a service.  Nowadays our local parade and the service are held in the towns park, I suppose it's more to do with money saving than anything else, road closures and policing cost money.  There was still a good turn out nonetheless, although I didn't see any Brownies or Guides, no idea why.
I took Oliver as Jenny was working and James' car was in the garage, thankfully the weather was dry and the temperatures are still very mild here. 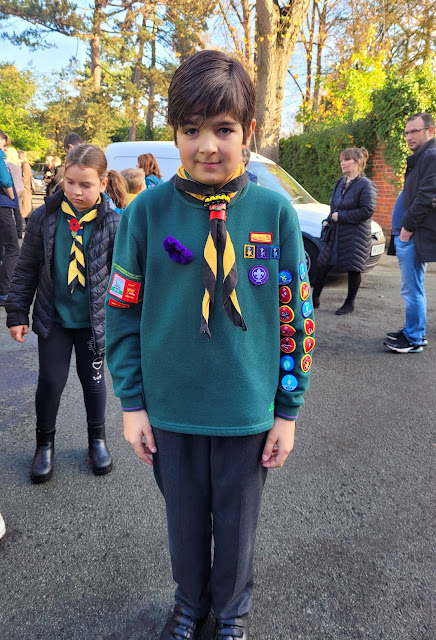 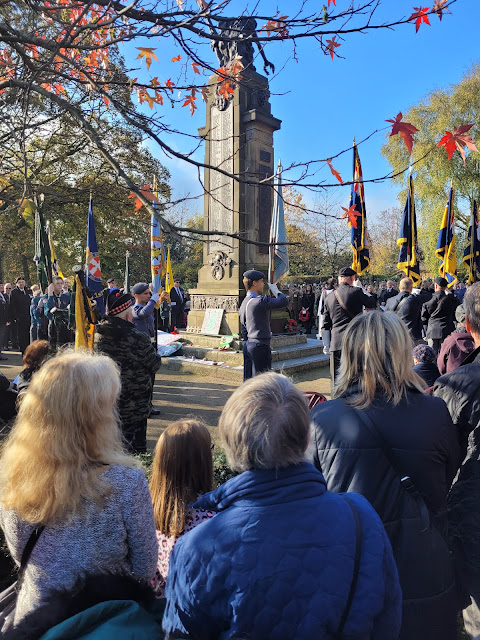 Week two of the Christmas Wishes CAL, the snowflake section was released last Thursday and  I've just managed to complete it today.  The snowflakes are worked using tapestry crochet which I've never done before, the stitches are only double crochet but as it's done by following a chart It did take a while to get my head around changing the colours at the right point.   There are probably some mistakes in there but on the whole I'm happy with how it's looking.
There was loads of chatter on the fb group of people struggling and the fact that you can see the white carried yarn through the red, I must admit that I initially thought It looks a bit weird too and the snowflakes definitely looked wrong, but the more you did the better it looked.  Actually, now I don't mind the white showing through, it gives a fair isle look to it.
Week three was released yesterday but I'm going to have a break from it over the weekend.

I hinted at a new hobby a couple of weeks ago, can you guess what it is? 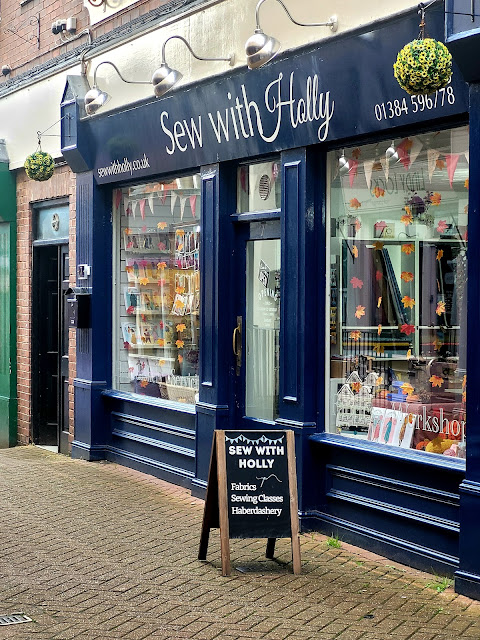 Sew With Holly is a lovely little haberdashery shop in our local town.  I popped in for some needles some time ago and found out that they run sewing classes.  I put my name down for when a space became available and got a phone call a few weeks later to say that there was a place starting in September.  I was very nervous because I've not really done any sewing since school, and I wasn't very good then, lol.  But I needn't have worried, Holly, the owner, takes our class and she is lovely.  There are usually only six of us on a Friday morning, (she runs classes on other days too), and everyone is either a beginner or improver.  Holly lets everyone carry on at their own pace but is on hand to help with anything you might need help with.  I needed a lot of help, of course, especially with deciding on size and cutting out. 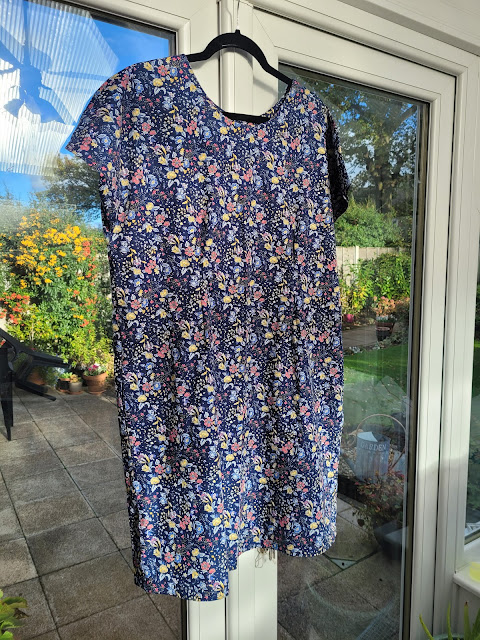 I decided to make the Stevie tunic again, you may remember I made this pattern a few years ago but didn't really know what I was doing.  With Holly's assistance I've been able to make something wearable and modify the pattern to what I wanted.  I added in seam pockets and darts to the front and back so it is slightly more fitted, and I made it longer.
The class is only paid for four weeks in advance and at £9 per class I think It's really good value.  I've just paid for another month and bought my next pattern to start next week, so watch this space, lol
I had a winning streak in September.  The lovely and very talented Martina had a Autumn chart giveaway, and I won Welcome Autumn by Primrose Cottage Stitches.
Thank you Martina, I shall look forward to stitching this as soon as I can.

I also won a yarn giveaway the same week on the podcast Little Likac.  Unfortunately It hasn't arrived, I know she mentioned that she had posted the two giveaways she had but it was around the time of the postal strikes, it's been well over a month now so I imagine that's got lost in the system somewhere.  It's so annoying when things get lost like that, postage isn't cheap, I have let her know today so that she can claim her postage back, if she's able to.
I've got tickets to the Creative Crafts show at the NEC in Birmingham tomorrow, I was going to go by train as the parking is very expensive but guess what?  There is a train strike!  So looks like I'm driving.  I have a list of bits and pieces I need want and I shall be on the look out for some fabric for my next sewing project.
Hope you all have a lovely weekend
-X-
See you soon...... Maggie 11 comments: