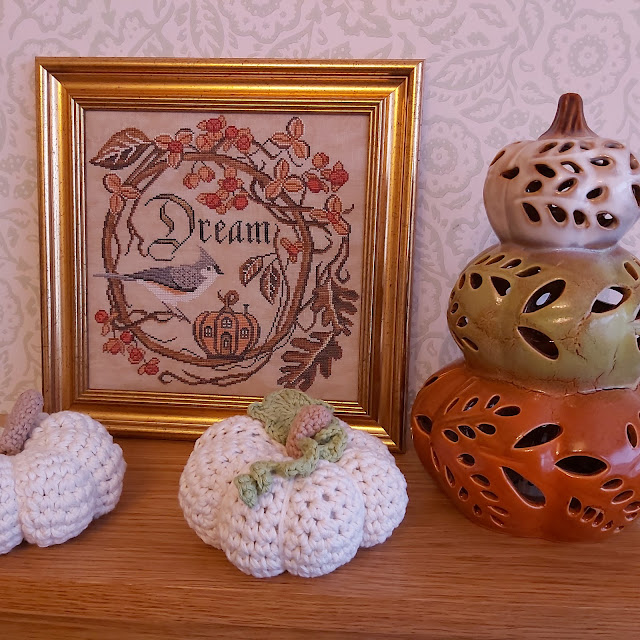 I found the frame in a charity shop early in the Summer, It's not very often you come across square frames and I knew it would be the perfect size for this piece.  Although, I would like opinions on the colour, it's brighter than I first thought, do you think it's too bright? should I paint it and distress it?  If I paint it, what colour would you suggest?

At the moment the stitching is just pinned, not laced so that If I do need to paint the frame It won't be a problem.   Here's a close shot of the frame, I'd love to know what you think. 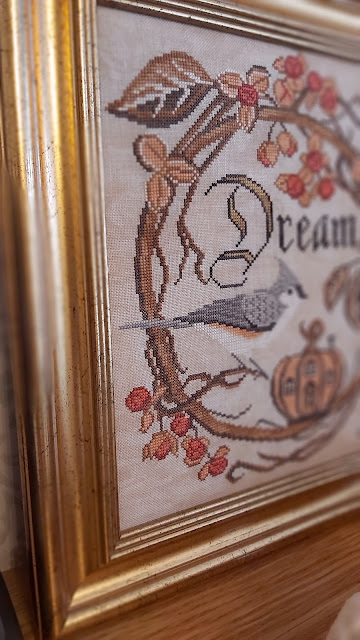 It was this cute little pumpkin house that first drew me to the chart, 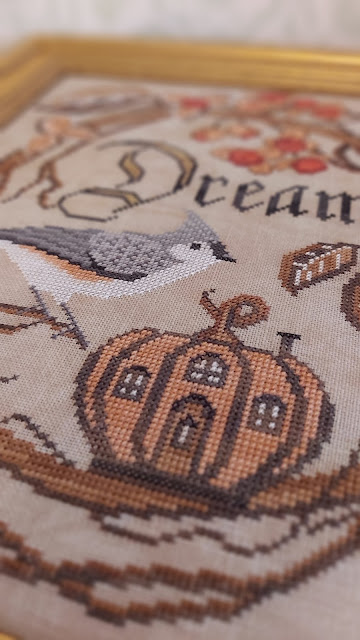 and of course that Tufted Titmouse 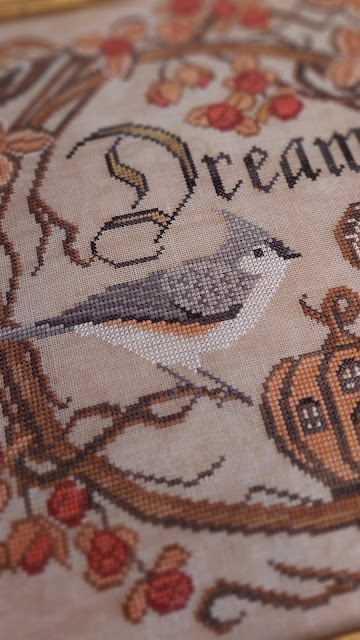 The piece wasn't without it's problems to stitch, those Bittersweets look lovely but were a bit of a pain to stitch, I miscounted, a lot, some I ripped out and stitched again, others were fudged, the piece is so fluid I don't think you can tell. 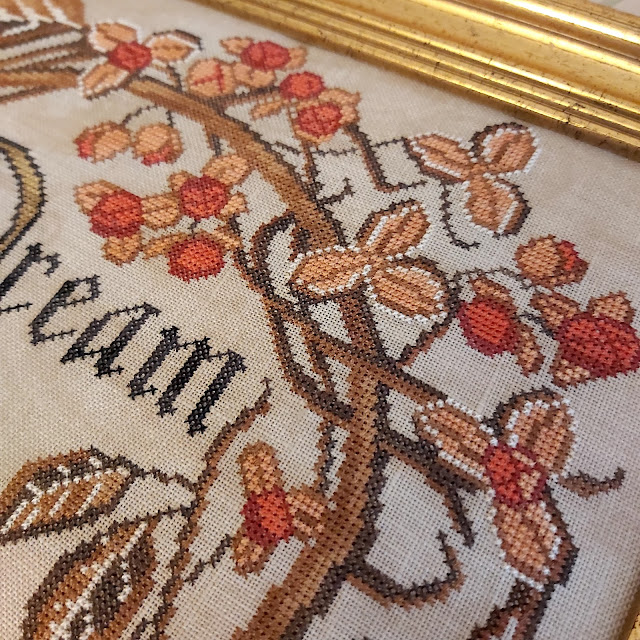 Isolating update
Thank you to everyone that sent get well wishes on my last post to my daughter to Joanne, she is doing ok, she did have a bit of a melt down a couple of nights ago, more to do with panicking than Covid but when she called 111 they said she could go to the walk in centre and get checked out.  She was there until the early hours but they did an x-ray on her lungs and blood test, all came back fine so that put her mind at rest.  She still has no sense of taste or smell and it still coughing but that should get better day by day.  Her husband's test came back inconclusive and he has been fine, as are the children.
There is another woman who Joanne works with who tested positive the day after she did, so more than likely one passed it to the other, but which one it was is anyone's guess!
I'd been in contact with Joanne for a couple of hours the Friday she tested positive, (I hadn't seen her all week, isn't that just sod's law!), so I've been doing a lateral flow test for a week because of going to mums.  I got up with a sore-ish throat on Tuesday and Wednesday my nose was blocked, although my LFT had been negative Stevie suggested I get a PCR test done, again because of going to mums, so on Wednesday afternoon I did and I got a text yesterday to say my test was positive for Covid.  So now I have to isolate for ten days.
I feel like I've got a cold, I'm sneezing and my nose is bunged up, I have got a cough, sort of a bark, not all the time though, and today it's better than it was yesterday, and it's not as bad as Joanne's cough.
I haven't had a temperature nor have I had a headache, I have felt lethargic today, just like you would if you had a cold, in fact, if it hadn't been for me having to go to mums most days I wouldn't have done a test and I've have just said I'd got a cold.
I haven't been going anywhere except for food shopping, I haven't been meeting up with friends or going anywhere that's crowded, I even gave our first stitching meet up a miss a couple of weeks ago because I didn't want to be in close contact with people I hadn't seen in almost two years and have refused to go for a meal with some friends recently too because I just wouldn't feel comfortable, and I still wear a mask and sanitise when out, so the only place I could have got it is from Joanne visiting for those couple of hours last Friday.  She feels really bad about it and keeps saying sorry but she had been testing for work and was showing negative all week, so how was she to know?
I am thankful though that the symptoms I'm having are mild.
We decided that It's best if Mark stays in Glasgow this weekend as it would be difficult to keep separate in home and It wouldn't  be good if he took it back and past it around the job!
I've got plenty of paracetamol, tissues and tea to keep me going and of course I've got crafty things to keep me occupied, I just need to find something good to watch on TV and I'll be sorted.
I hope you all have a good weekend, and if you are out and about stay safe, it's still out there!
-X-
See you soon...... Maggie

I'm so glad you are not feeling too bad, there are so many colds going around here, it's hard to say what the bugs are. I still wear my mask when shopping.

Hope you feel better very soon! I think the gold frame is just right, and your stitching is beautiful!

I think the frame is perfect for the stitching - autumnal gold. I'm always in awe of anyone who can stitch on any count smaller than 14! It looks brilliant.
Hope you feel better soon.

I'm glad you found a suitable frame. I paint some of my frames with a matt grey paint if they're too shiny, but that's because they look better with our decor. Your stitching is beautiful and impressive. I'm sorry to hear you and members of the family are unwell. Yes, Covid is still there. I hope you feel better soon.

Hello Maggie,
a wonderful finish and the frame is perfect.
Have a nice weekend.

Oh Maggie I am so sorry you did get COVID. I am glad Mark is isolating. I hope he can avoid it.
Autumn Dream in that frame is SUPER!!

Oh no, that's all you need with all the looking after grandchildren and your mum that you do, I hope they're all okay. I'm glad both you and Joanne don't appear to feel too bad with it, fingers crossed it stays that way. I think Mark's being very sensible staying away, you just can't be too careful, as you say, you've probably picked it up from being with Joanne a matter of a couple of hours so he's doing the right thing. Hope that both you and Joanne recover quickly. Your stitching is lovely, perfect for autumn and I like the frame as it is.

Hope you and your family feel better soon, love the frame too. Be well. Big hugs Lynda Ruth

Oh, Maggie, I'm so sorry that Covid has hit your family! It sounds like you'll be back to normal very soon and I hope the case stays mild. My son, although testing negative by rapid test, lost his sense of smell and taste and was very ill in July. I'm sure he had it--and 4 months later he's just now getting his taste and smell back. Strangely none of the rest of us who were around him at the time came down with it. He had one vaccine--we all had a different one.

I so love your Dream finish. When I start my next in the series I think that will be it. Just love those beautiful fall colors and the little pumpkin house is adorable. Congratulations--I know those pieces take quite a while to stitch :) My advice on the frame is to live with it for a while... If it's still bothering you, you may be able to tone down the brightness with a wax or something. I don't know, but it really does look fine as is. Take care now and I hope your daughter is recovering as well ♥

I do like the frame and love your stitching, that piece looks great.

Sorry to read about you and Joanne.
Sending lots of get well wishes to you both.

I love the frame you chose for your stitching : it looks well.
I wish you feel better soon,
Greetings,
Isa

I just read this blog and I surely hope that by the time you get it, you are all on the mend! I am so sorry you and your daughter had to go through this! That is such a beautiful stitched piece. I think the frame is fine. If you want to tone it down a little perhaps some dark brown wax would do the job! Again, I hope this finds all of you doing much better!

Hopefully you both feel well. Autumn Dream is very nice and the frame you choose too. It’s a fine outcome.
Miriam

I am glad that you are doing okay. Covid is a sneaky virus.

I love Autumn Dream and the frame is perfect. I don't think you need to do anything to it. The colour reminds me of the wheat fields here in Canada.

So sorry Joanne and you are positive. I had a lot of what your daughter has when COVID got me. It took 2 months to regain my taste and smell and for the congestion to go away. All I can say is rest! Take care of yourselves, take vitamin D, and get something that'll take care of the extra mucus, it really does help! Hope you're all starting to feel better.