Every cloud has a Silver (cardigan) lining

Hello, I hope you are well, it's been a few weeks hasn't it, mainly because there is not much going on, just the usual day to day stuff, work and Nanny duties, nothing very interesting to tell you and no finished crafting either, until this weekend, but more about that later.

Another reason I've been absent is because I've been feeling really down in the dumps, (I hesitate to say depressed) but I suppose that's what it amounts too, I feel like a hamster on a wheel, constantly on the go but getting nowhere and nothing accomplished.
I've have one more week at work and then a week off, we're not going away, we may have days out, but to be honest I'm not even interested in doing that at the moment so we'll see.

Anyway, there are people out there with harder lives than mine and in the great scheme of things I have nothing to complain about so I'll say no more.

On to crafty things.
Silver Cardigan by Kristina Temin

I've had this little cardigan pattern in my Ravelry favourites for a while.
The pattern says it's for a 1 year old but after looking at others who have made it it does seem to be one of those that comes up bigger so I thought I'd chance it.

I used some Stylecraft Classique cotton DK in this lovely sky blue colour which I've had in my stash for a while, and It came out pretty cute :-) 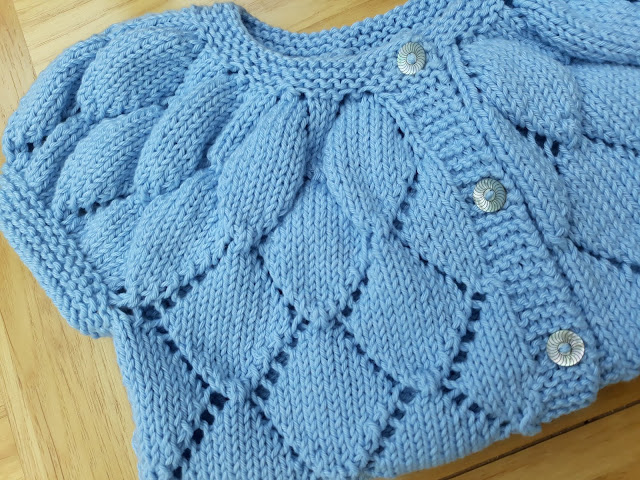 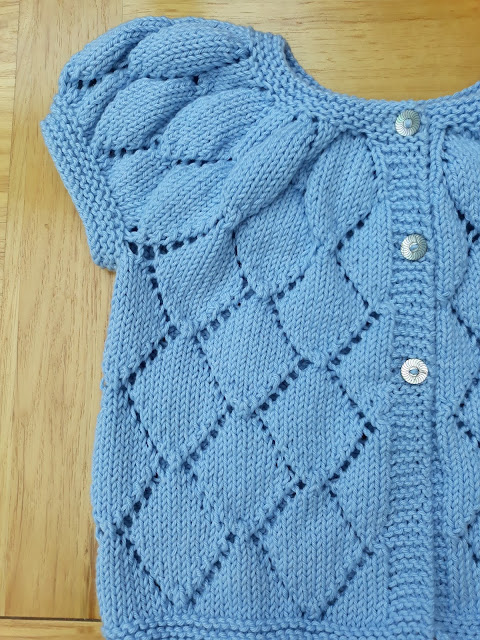 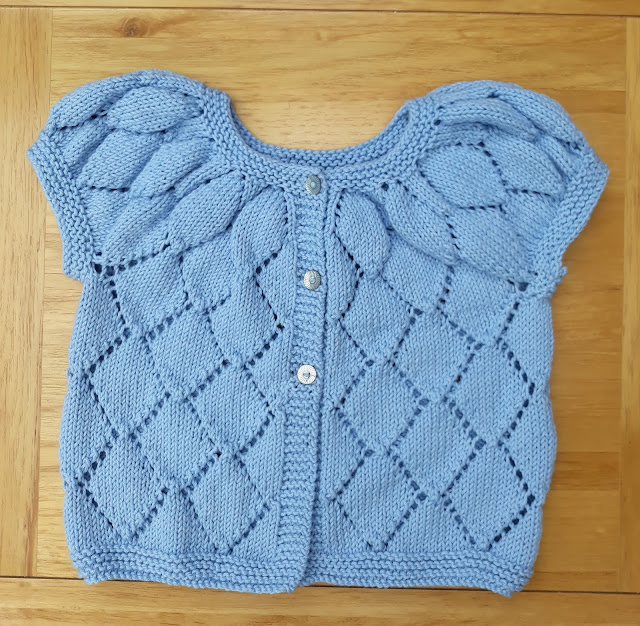 I've no idea how it will stand up to washing, I've given instructions to Joanne that It may be better to hand wash rather than machine wash otherwise I've got a feeling it may grow.

I will be putting all my knitting notes on Ravelry, I've decided that I'm going to (try) to be better at making notes on my Ravelry pages after I found myself looking at patterns recently and searching finished projects for hints and tips.
It's surprising how little there are when you start looking, but I imagine it's a time thing with most people.
I would like to knit another one of these for Bonnie, so my notes will be helpful to me, if not anyone else.

Ok, that's it for now, no garden photos to show this time, we are in flaming June but not in the sunshine sense, it's been rather wet and soggy here which makes for a very green looking garden but not much of any other colour, we need the sun to make an appearance and then maybe the flowers will bloom and I can get out and tidy up all the bits of sticks and twigs

PS forgot to say the pattern is a free one on Ravelry if you are interested, just search Silver Cardigan

What an adorable little sweater. Sure hope your week off is helpful! Sometimes a stay at home is just what you need.

The little jacket looks pretty, I like the pattern well, but also the color you chose.
I would also wash it by hand, would be a pity if it is ruined in the machine.
Have a nice week, Martina

Such a pretty cardigan , love the blue colour.
Sorry you have felt a bit down ,I think it's the weather and sometimes Hay fever can make you feel so low.
What I do Maggie is start something new that gets me going again.
A bit of sunshine will help , lets hope it's a better week .
And enjoy your week off hugs.

What a lovely cardigan and such a sweet colour. I do think blue looks soft and sweet on little girls. The weather can make us feel down, but if it's an on going thing do see your doctor. Best, Jane x

I'm sorry to hear you've been feeling down, perhaps a week off is just what you need, and even if you don't feel like having a day out, do push yourself, I find a change of scenery can really help. I've enjoyed having a few days out and about, it's helped me get out of the doldrums. The little cardigan is really lovely, it's one which I've got in my Ravelry queue, I've even bought the yarn for it.

Love your knitting, the style and colour are beautiful. I'm a bit like you, I think we have been hoping for summer for so long, and now it's June and the weather is terrible. British Summer.

That's a lovely colour and shows off the detail really well. I don't think we always have to have a reason for feeling a little down in the dumps. When I feel like this I just tell the other half that Evil Edna is with us and he knows that means I'm not feeling 100% but also he knows he's not done anything wrong its just that mood has come over me and it may stay for a day a week a month but hopefully not a year. I find going out walking helps or spending time in my garden helps although we've not really had the weather to do that over the last week have we. Either way I hope you get a spring back in your step soon.

This cardigan is lovely Maggie! I am sorry for your depression Maggie. I think a change of scenery or spending a bit more time with the grands would help. They are such sweet, little characters.

I do like the cardigan, and the colour is a perfect blue :)

I get the hamster wheel feeling, especially where it's getting nowhere. I do hope the feeling makes an exit soon for you and that the sun makes an appearance. That cardigan is just the sweetest thing ever. You knit the most wonderful items and you're very good at it. Enjoy your week off!

The sweater is very pretty, and I hope it holds up. Anxious to see what color you pick for the 2nd one. Nice t see you back blogging. Perhaps doing so will help your mood, you just never know. I've not been good about putting things on RAV in a long time. I too have been there searching things of late, so perhaps I should try and make an effort. We've been green ad soggy too, not much of a June. The rain has sure made the weeds grow. Good luck to you and hang in there.

Such a cute cardigan, I really must get to grips with my ravelry page and add stuff and technology and add stuff I see and like. It would make the perfect pattern for the knit group donation table and looks an easy project.
Sending {{hugs}} your way, hope your week off helps you get back to feeling a lot brighter. This silly weather pattern isn't helping as we all want to be in the garden enjoying some sunshine and it just isn't happening. Summer solstice in the morning to that's the longest day!

I do hope you're feeling a bit sunnier by now, Maggie. I often get down, too, when our weather is horrible (which it usually is!). My moods are so tied in with the weather that I'm realizing I probably do need to move to a sunnier climate when my husband retires. I find exercise to be the biggest help :)