Rain with a chance of sun

Mark had to go up to York on Saturday to do a couple of little jobs at the Bowling place that was finished last year just as the first lockdown came into force, he asked if I wanted to go along too and have a day in York while he did what he had to do and, as I haven't been very far in ages I jumped at the chance for a change of scenery.

The weather here on Friday was glorious, but I had other things planned for that day so we decided to travel up on the Saturday morning and stay over night.  Of course the weather changed over night, it's a good three hours drive up to York from here and we ended up driving up there with rain most of the way. 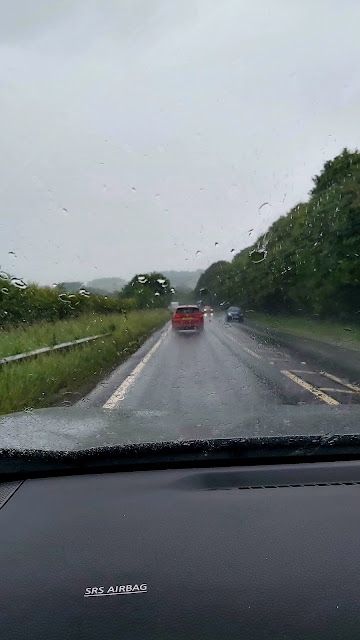 The rain did clear by the time we arrived and as the Park and Ride is right outside where Mark had to be and only a five minute ride, I jumped on the bus into town.
A short walk away from where I got off the bus is York's most famous street, Shambles.  I've not been to York in a good many years and I wanted to walk up these cobbled streets again. 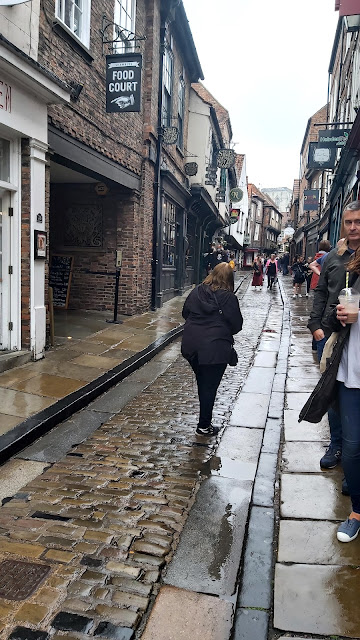 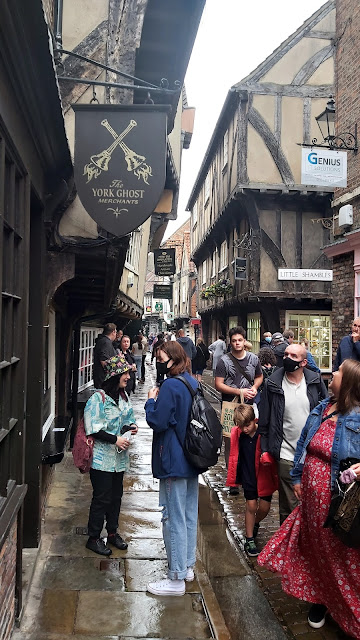 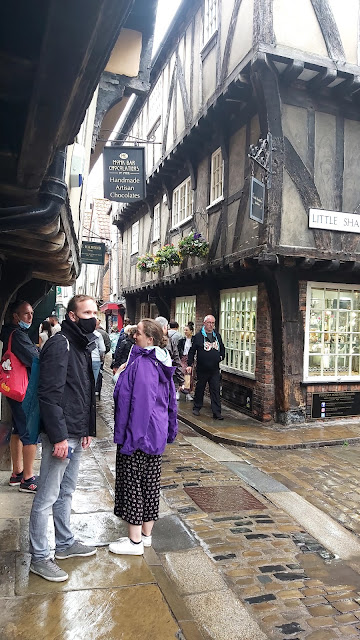 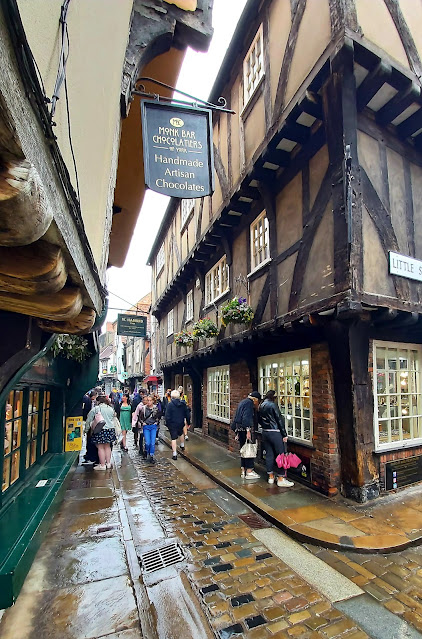 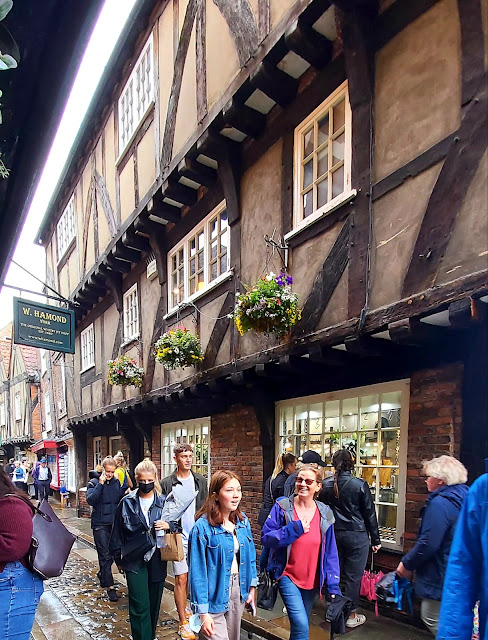 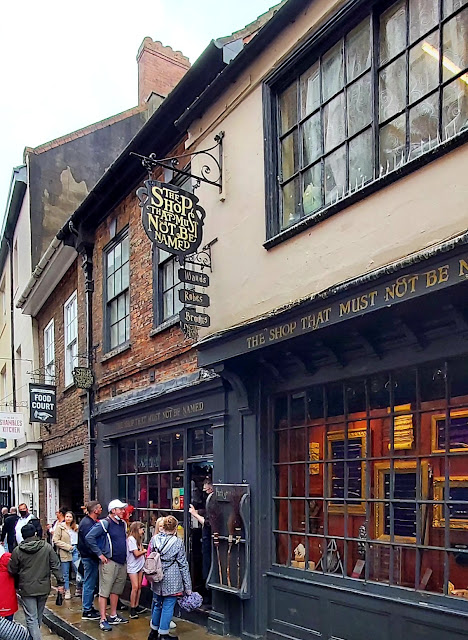 I'd like to say it was how I remembered, but it wasn't.  The lovely quaint street has now been mostly taken over by Harry Potter themed shops.  I love Harry Potter, I've read all the books, several times but, I think it's taken away some of the history and feel of the street.  There is a rumour that Diagon Ally was based on Shambles, (hence the shops, I suppose), however JK Rowlng dismissed this on Twitter saying that she had never been to or seen Shambles, so there goes that myth.
I did walk around a little for a couple of hours but the rain set in so I headed back on the bus to meet Mark.  Our hotel was half way between York and Scarborough, and the plan had been to visit Scarborough on the Saturday afternoon but as the weather was pretty awful by that time we just went to the hotel.
Sunday morning we woke to blue sky's so, after breakfast we drove the few miles into Scarborough.
I hadn't seen the sea in almost two years and the last time we visited Scarborough was around 2012.
Scarborough has two bay's, the North Bay and the South Bay, both with lovely sandy beaches.  We only had enough time to walk around one so we parked up on the South Bay side.  We had a lovely walk along the beach and the harbour, there were quite a few people about but it didn't feel crowded. 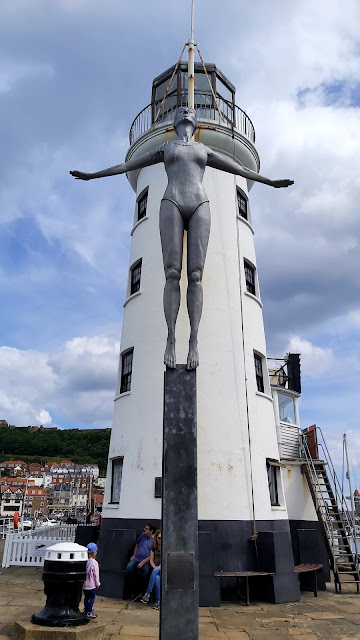 Scarborough was the UK's first seaside resort and The Grand Hotel dominates the South Bay.  At the time of its completion in 1867 it was the largest hotel in Europe and one of the biggest is the world.
The geek in me always likes to look up some information on where we are going and I regaled my findings about The Grand to Mark as we were walking along the beach.
It took around ten years to build at a cost of £100,000, (around £11.5M in today's money), has 4 towers to represent the four seasons, 12 floors to represent the months in a year, 52 chimneys to represent weeks in a year and 365 rooms, representing the number of days in a year.  The hotel is also built in an unusual V-shaped style to honor Queen Victoria who was the Monarch at that time.
In WWII it was used as a base for the RAF and anti aircraft guns were mounted on the four towers.
Over the years there have been many famous guests too including, The Beatles, King Edward VIII and  Winston Churchill, there is also a Blue Plaque on the hotel which marks where Anne Bronte died in a house on the site where the hotel stands.

It is a lovely grand old building and you can just imagine what it would have been like in day's gone by. Sadly now it is in need of some TLC.  It is still used as a hotel but does not have very good reviews and is certainly not the grand place it once was, it could be re-named the Seagull Hotel as there are birds on every ledge and in every crevice.  I bet the noise is horrendous in the rooms, I took a little video, hope it works.
We missed any rain in Scarborough but there was enough rain for Noah to launch the Ark on the way home! 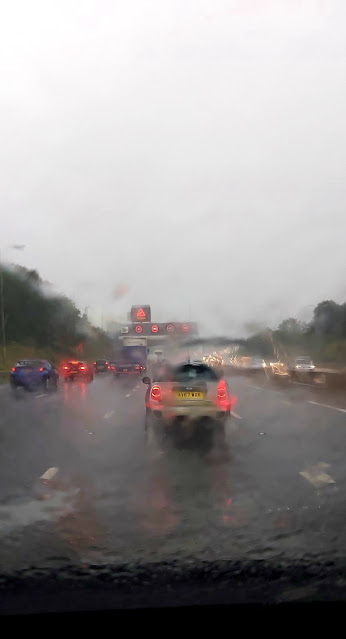 ~~~~~~~~~~~~~~~~~~
We arrived home on Sunday tea time to a phone call from my sister to tell me mum had had a fall on Saturday night/ Sunday morning.  She hadn't hurt herself as she sort of slid down as apposed to going a wollop.  She has however been a bit more confused and falls asleep all the time we've noticed this last week or so, more than usual so I said I would feel better calling the doctor on Monday.  Well I'm glad I did because she had a really low heart rate, (41) and has ended up in hospital.  She's doing ok, I will know more of what is going to happen once the doctor has seen her again tomorrow, I can call after lunch time for an update.
It was a long day on Monday, I spent most of it at mums waiting for the paramedics to come, they arrived at 10pm and by the time mum was settled at hospital it was 2am before I got into bed.
I had another visit to hospital last night with Stevie, she suffers with anxiety/stress and had palpitations and an increased heart rate so took herself off to A&E about 6pm.  I went down and stayed with her, they scared her a bit because they said they needed to 'get this sorted' and her to have a blood tests.
Long story short, she is fine, her ecg and bloods all came back normal.  Stevie is a worrier like me and is prone to panic attacks, she has tried all the usual things and I've suggested some things for her to try but I know it's scary when you have these episodes and often there is no rhyme or reason to them.
It was almost 4am when we got back, so two nights of very little sleep have wiped me out but, at least she was checked over thoroughly and even though It was a long time to sit in A&E we are so lucky that here in the UK we have a free health service that we can call upon, sitting there so many hours yesterday gave us both an insight to the comings and goings and how hard these people work, and they go about it with such a calm attitude.  It's a job and an environment that I don't think I would be able to work in, but I am so thankful for the people that can, and do.
-X-
See you soon...... Maggie

You had quite the weekend.

Shambles looks very interesting and the shore is beautiful. Loved seeing your photos.

Hope your mom and Stevie are both feeling better today.

Firstly hugs for your Mum and Stevie, I hope you've caught up on your sleep.

We stayed in Scarborough when the children were quite young, it's a lovely place, the hotel is very prominent. I haven't been to York in years, we passed nearby on the way to Scotland and said we should go again.

What a worry for you with your mom , so happy things were ok.
What a lovely break you had always nice to get away .
I met a friend yesterday at the seaside we had a good time .
Take care try and get some extra sleep.

I'm glad Stevie's okay and though she may have been a little panicked at having the tests, they've surely put her mind at rest now. It must be terrible having stress and anxiety so bad, I've had a little insight at exam time with Eleanor, thankfully it only seems to have affected her at these times. I hope your mum's on the mend soon, she's in the right place and being cared for. It's such a worry as our parents get older. What a lovely weekend you had. Being close to both York and Scarborough, they're places we often visit and I never grow tired of them. There's so many things to see and do in both York and Scarborough.

Thank you so much for the little tour of Scarborough. It's always sad to see once famous hotels on their uppers, a bit like seeing old Hollywood stars in very old age. But I'm sure it was wonderful to get away, did you visit Betty's whilst you were in York? My best wishes to your Mum and Stevie, hope they're both feeling better soon.
Jean. x

Hello Maggie, just surfed in from Linda’s A Rich Tapestry after being intrigued by your ID. I live in the States (for the last 45 years) but was born in Smethwick and grew up in Wednesbury. My parents are from Wolverhampton and I still have many family members from there. Thoroughly enjoyed your blog, great photos and a great read. Wishing you all the very best and do hope your mum and Stevie are feeling better today. My mum and dad always said how lucky they felt with the NHS and the people who worked there. My mum was one of them for many years.

I enjoyed seeing your photographs of York and The Shambles, it looks quite busy there.
Scarborough looks beautiful too, the views you've shared look so nice, I would like to visit.

Sorry to read about your mums health worries and Stevie's too. I hope they both feel better soon.

Your photos of your trip were such fun for to see. Any time I am by the sea, I am happy. So glad that Stevie is fine and I hope your mom will be well soon. It is really a worry.

Not the best of endings to your weekend break. I hope that your mother is better/improving and that it will become easier for Stevie to manage her anxiety.

If you are passionate with outdoor lighting. Let Outdoor Lighting Lubbock light up your home with tasteful energy-efficient LED lighting!
We hope to hear from you about any of your tree or outdoor lighting projects and how we can help turn your dreams into a reality. Please give us a call at
lubbock tree trimming.
We are always happy to answer any of your questio