I want to try and use up some odd balls of acrylic yarn that I have, In most cases I have just one or two balls of a colour, not enough to make a garment, even a small one so I will make a few small blankets to use them up.  This one is a small pram/pushchair size, I had one ball of the blue so worked until that had gone.  It's for no one in particular, I might donate it or ask one of the girls if they know anyone who could use it. 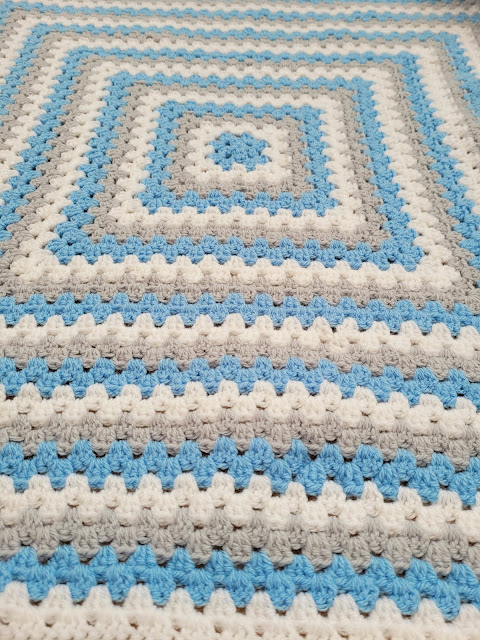 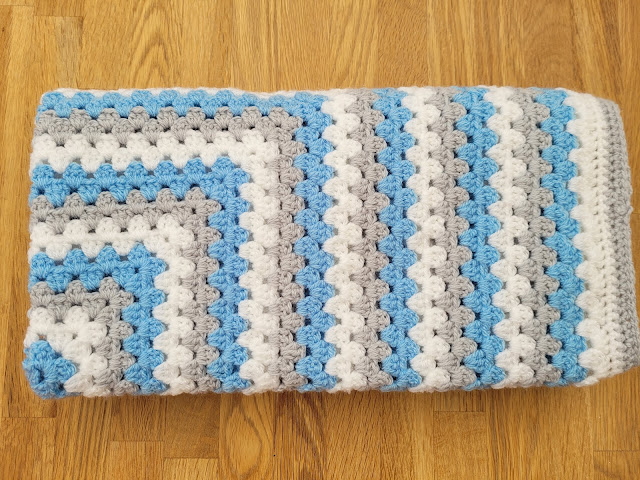 I have more grey and white so I will see what else I can team that with to make another one soon.
I've enjoyed working on this simple granny square and remembered that I have another crochet blanket that I started a few years ago and didn't finish.
This is the Crofter Blanket and it's been a good few years since it's seen the light of day, but now it's out I'm going to try and do a bit each week until it's finished. 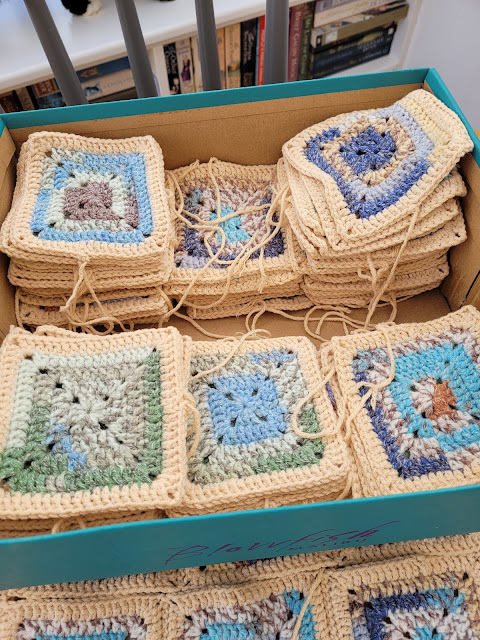 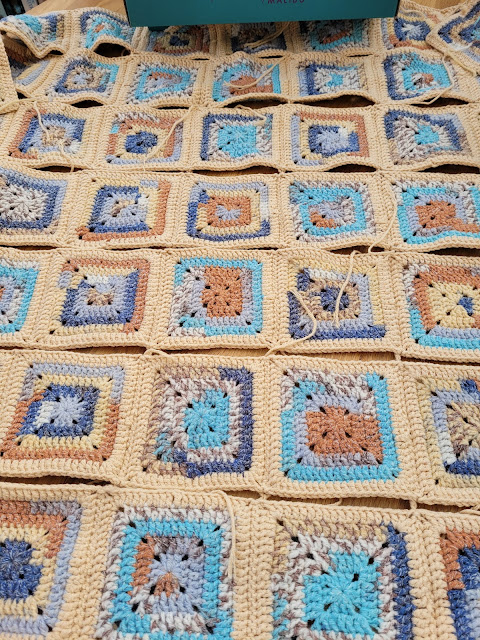 I think I put it away because I wasn't too keen on the colour, and it's still not my favourite colourway but It's better finished than sitting in a box, and if i don't like it once it's finished I can always give it away.
~~~~~~~~~~~~~~
One of my doctors appointments last week got cancelled, twice, my smear test is now Feb 7th, unless it gets cancelled again.  Physio wants me to go to do rehabilitation, that will entail a weekly session at one of the local hospitals,  but first she wanted to do some blood tests and will make me an appointment a once those have come back.  I've had achilles tendinitis for years on and off, it was particularly bad all summer last year, I've been doing the recommended exercises for over twelve months and it's never gone away completely, I just have days when it's not as bad as others.  The rehabilitation work will, so I'm told, work on strengthening the leg muscles so that there is less strain on the tendon.   I'd just like to walk a decent distance without limping and being in pain, sometimes for days afterwards.

Saturday was such a horrible day, it barely got light all day, the weather grey and foggy, not a day for going out but I wanted to do something, so we opted for an afternoon trip to the cinema.   We went to see A Man Called Otto, based on the book A Man Called Ove by Fredrik Backman.  I had read the book in 2018 and loved it, we have also watched the Swedish film.  This new version, which is set in America rather than Sweden and has Tom Hanks as the cantankerous Otto is good, we both really enjoyed it, It is somewhat different to the Swedish film, but I think that's probably to make it appeal to a wider audience, but well worth it.  If you haven't read A Man Called Ove I can highly recommend it, I'd put it in my top 10 books.

Have a lovely week

I love your 1st finish of the year, I'm months away from a finish on anything, all my projects are huge. We have made a note of A man named Otto, we saw Tom Hanks talking about the role and decided it was a film for us.

Both of your blankets are lovely. You'll have that second one stitched together in no time.

I read A Man Called Ove awhile back, but I found a copy in one of the Little Free Libraries. I'm going to reread it this year.

The colours of your first blanket finish of 2023 are lovely. I hope you like the second one too when you have finished sewing it together.

I do like the colours of your first blanket finish of 2023, it looks lovely.
I'm sure once you get more into finishing your other one the end result will be pleasing.

Sorry about the rescheduled medical appointments.
Hoping the Physio rehabilitation sessions will help your pain and discomfort.

Take care, keep warm and enjoy the week ahead.

What a pretty blanket that you finished. I don't crochet so I am always amazed at how lovely those crochet blankets are.

I have heard that A Man Called Otto is very good.

love that blanket, so pretty with those colours. Can't wait to see the finished item with all the squares. You are very talented.

Love your blankets , great idea for using up wool ,I need to make one again soon
just found out another baby on the way in the family .
Sounds like a good film I love Tom Hanks, I love to watch his films.
I am off this morning for a blood test , before I see the nurse for my well Woman's clinic in a weeks time.
Have a fun week hugs June.

It's good to get odd balls of yarn used up, and projects which have been on the go for some time finished. There's always someone who could use a blanket if you don't want to keep them yourself. I'm wanting to do the same things this year, finish things off and use up some of my stash. I can't remember the last time I went to the cinema. I don't find it particularly enjoyable as I find it quite hard to just sit and look at a screen for any length of time, I like to be doing something else at the same time, so it has to be a film I really want to see if I do go. Glad you enjoyed it, and I shall definitely look out for the book, that's high praise indeed if your'd consider it one of your top ten.

Making and donating that blanket is just wonderful Maggie.
Your Crofter Blanket reminds me of the beach. :)
I have never read A Man Calle Ove, but it sounds very good. I just ordered it from my library. Thank you!

It's very satisfying to finish off a project, no? I find something will put me off and things get left. But as you say if you don't like the Crofter's Blanket when it's finished you can donate. I'm sure there are many folk who would be grateful for it. And a blanket will last for many winters. I didn't think I would go and see the new Tom Hanks film as I loved the Swedish version, but I might go now.

Love that sweet blanket, Maggie--perfect for a little one! I'm sure whoever receives it will love it, too. I bet you'll have that pretty Crofter Blanket finished in no time.

Loved the book--and really want to see the film as it was filmed not more than five miles from me :) Lots of excitement when Tom Hanks was in town as you can imagine!